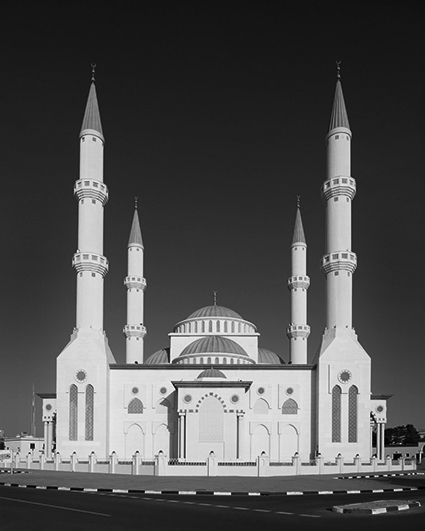 If you didn’t know, Dubai has it’s own version of the famous Blue Mosque in Istanbul. Nestled between villas in Jumeirah, theÂ Al Farooq Umar ibn Al Khattab Mosque, with its four minarets, rises above everything else in this low-laying neighbourhood Â and it’s the third mosque in the UAE to allow non-muslim visitors.

I’ve driven past the mosque a few times, but I always felt that it was a difficult location to take a good photo as there is not much space around the mosque and because the minarets are really tall, they would get distorted quite a bit with a very wide-angle lens. Enter my new toy – the Nikon 24mm perspective control lens. It finally arrived earlier today and the first thought I had when I planned on trying was to photograph this mosque. For those of you who don’t know what a perspective control lens is (also known as a tilt-shift lens), it’s a lens which allows you to control the perspective of a scene giving you the ability to move it parallel to the sensor.

Unfortunately it was a typical no-clouds Dubai day, so I ended up going for a high-contrast black and white shot with which I am fairly happy.