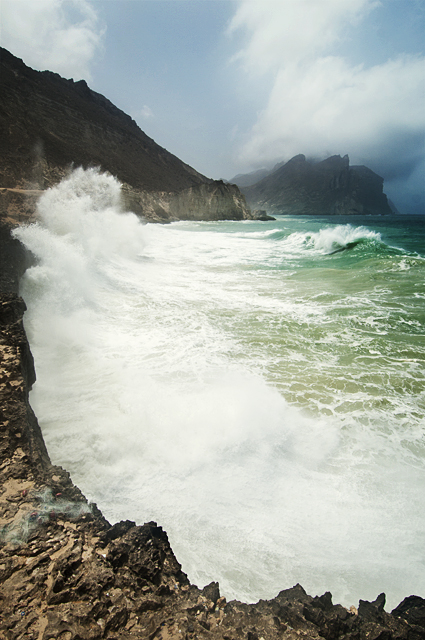 Taking full advantage of my new blog layout which allows me to post portrait images in a more controlled manner (and the fact that a popular Dubai based magazine will be using one of my shots from Salalah for its next week’s cover), I spent the weekend in Salalah trying to take a lot more portrait formatted images. I found this to be very liberating as for the last few years I took mostly landscape shots always thinking that they will look better on the blog. Now that I have the option of displaying these images in a more friendly format, you should expect some older shots that I never got around to posting. Anyway, enough rambling…

Today’s shot is also from Salalah. To be more precise, it was taken about 40km south of Salalah close to Mughsail Beach. During the Khareef season, when the surf is up, the waves crash against the rocky coastline spitting out huge columns of water through the blowholes formed in the rocks. It’s an amazing site, that comes with a fitting soundtrack. It’s almost impossible taking two consecutive photos without having to wipe the water off your lenses as the water spray is constantly blown by the wind.

In terms of post-processing, by looking at the original, you will notice that I decided to horizontally flip this image as I felt it worked a lot better with the rocks on the left. It’s just a personal choice and since I’m not shooting for a newspaper, I have a certain creative freedom. I’ve also used a few curves to improve the contrast in the sky and balance the light on the left and right side of the sky.