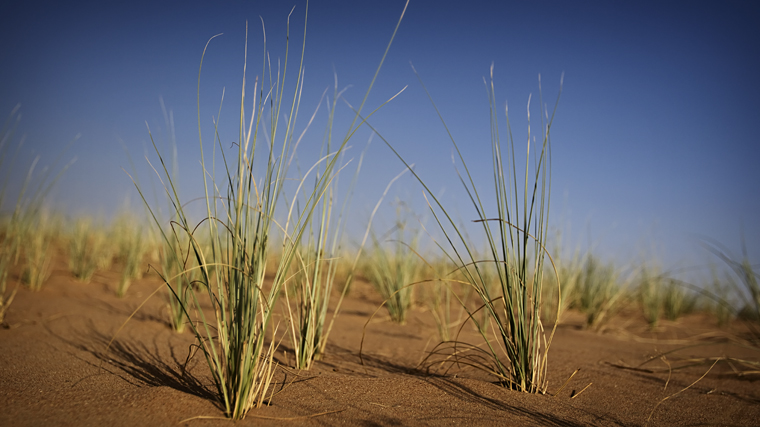 Yesterday I had a look outside in the afternoon and I noticed the sky was unusually blue for this time of year in Dubai so I decided to go out and give the Canon 1D Mark IV another try considering I still have it until Sunday. With Slidefest II still fresh in my mind (and in particular the beautiful desert pictures of Mike GreenÂ – one of the photographers at Slidefest)Â I headedÂ for the desert between Dubai and Al Ain. I managed toÂ find a few holes through the never-ending Â camel fences and came away with quite a few shots that I was happy with.

That bringsÂ me to today’s photograph. I don’t suppose it’s called desert grass, but for the lack of a better name I decided to call it that and see if I can get away with it. Does anybody know the actual name of it? It was great to have the 16mm-35mm f2.8 lens on the full frame (correction: As @arthas191 has pointed on Twitter the 1D has a 1.3x crop sensor) Canon 1D Mark IV because this allowed me to get in very close to the grass, while still being able to captureÂ its full length. I also used a polarizing filter on the lens to try and bring out every last bit of blue in the sky.

The processing was fairly simple with just a couple of curves, increasing the contrast. All the curves had the blend mode set to “Luminosity”, otherwise the desert was becoming quite saturated. This is a great tip when using curves on a very colourful image. The colours tend to become quite saturated and setting the blend mode to “Luminosity” will keep the saturation in check.

AsÂ for my review of the Canon 1D Mark IV, I’m almost done and it should be online in a couple of days.