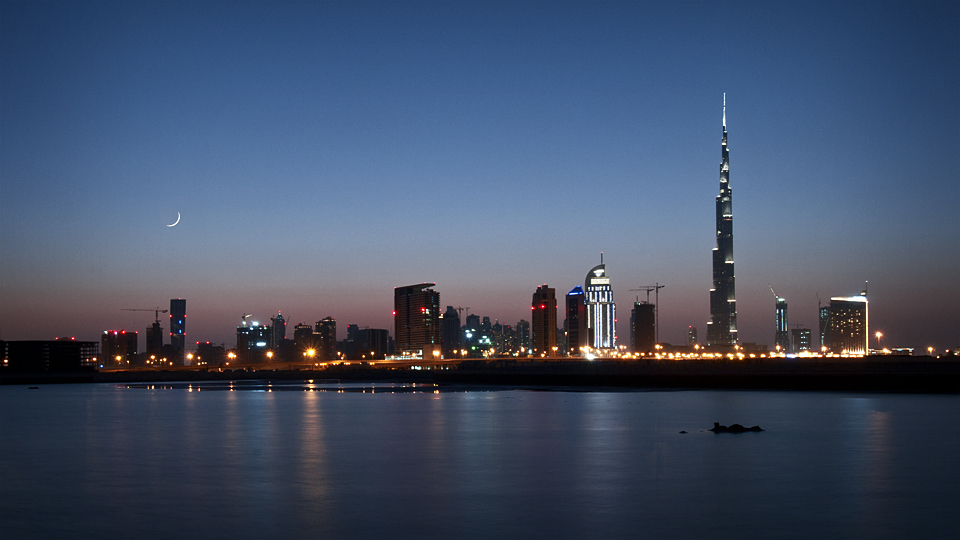 If you have visited my blog before, you’ll know that sometimes I speak about the difference between how you see a scene and how you can actually capture that scene with a camera. Although purists will probably argue with this, sometimes it’s just impossible to capture a scene just like you perceived it through your eyes. The reasons might be as varied as the camera’s ability to capture light in a certain way or differences in size and distance between subjects. This was exactly the case with the image below.

This weekend I met up with Daniel, a Dubai-based photographer that has a great eye for landscapes and who has some amazing shots from quite a few places around the world. Daniel and I have been wanting to shoot together for a while now and it was great to finally catch up.

We headed for Business Bay trying to get on a roof or two, which didn’t really work so we ended up at the end of the Dubai Creek extension looking for some nice skyline shots. As luck would have it, just as the sun was setting and the “blue hour” was beginning I noticed a beautiful new moon sitting just above the horizon.

Now, all of you who tried to photographed the moon alongside a city landscape will know that it’s a difficult thing to do as the moon will always look very small compared to everything else.Â  Knowing that, I decided to shoot the landscape with my wide angle lens and the moon with my 70-300mm lens and to superimpose the two images. I’m quite happy with the result and to me it is a more accurate representation of the scene I witnessed. As always you can roll-over the image to see the original (straight from the camera) shot. What’s your opinion? Was it worth photographing the moon separately?