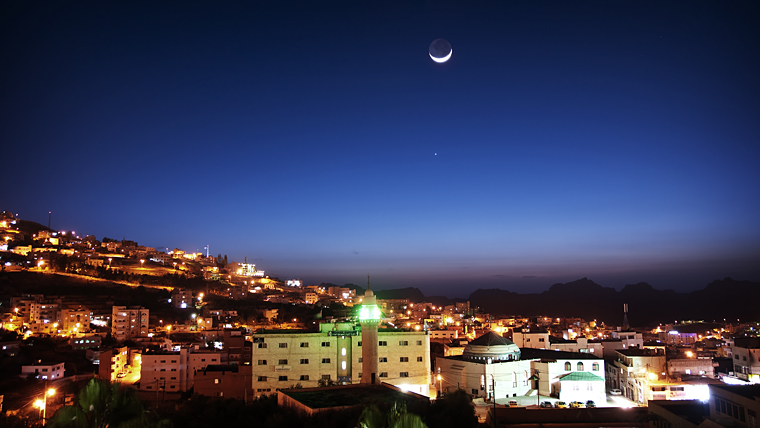 I’ll start today’s post with a disclaimer. Purists will shiver at the thought, but to get what I wanted from this photograph, I cheated slightly. I was in my hotel room in Petra (actually in Wadi Musa village which looks over Petra) and I spotted this beautiful new moon coming up.

The sky was a clear, blue one and you could even see the full shape of the moon, the bit that’s in the shadow. However, unless I was planning on posting a shot of just the moon there was no way to get both the village and the moon in the same shot with the moon a decent size. So I decided to take a loose, creative approach and shoot two different shots. The first shot was with my 12-24mm, shooting the village and getting a nice exposure for the colour of the sky. Then with my 70-300mm I zoomed in quite a bit and shot just the moon, exposing properly for it. I then combined the two shots in Photoshop et voilÃ !

I actually wanted to do this whole process in camera, combining the two shots straight into the camera, but to my shame I couldn’t find the correct options quick enough.