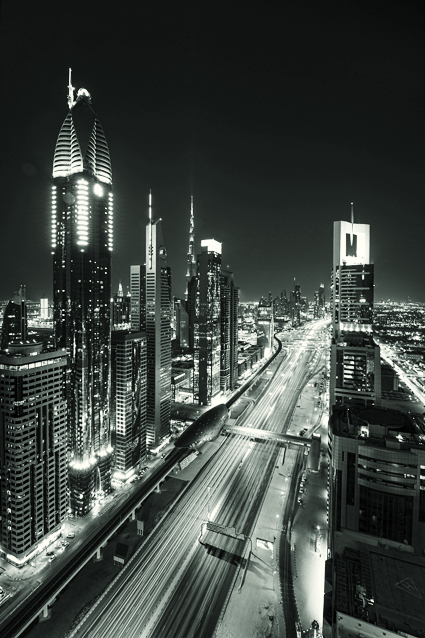 For the last couple of years, usually twice a year, David Nightingale makes his way to Dubai to run workshops at Gulf Photo Plus here in Dubai and most of the times David and I have managed to go out shooting together some Dubai cityscapes. This year, David is helping Sony with the launch of the new full-frame DSLR (which by the way looks very impressive!) and he needed to get to a couple of well-tested locations so we headed towards some of the places we’ve shot before from. Once that was done he suggested we head up to the bar at the top of the Four Points Sheraton which is quite a famous location for taking pictures of Dubai’s main artery – Sheikh Zayed Road.

I think I’ve seen this shot taken by just about every photographer that ever made their way to Dubai so I was always quite reticent about going up there to take the same exact shot (particularly because there’s not that many angles you can shoot from there). But we did go and I’m happy we did as it is a great location for simply appreciating the size of Dubai and it’s skyscrapers.