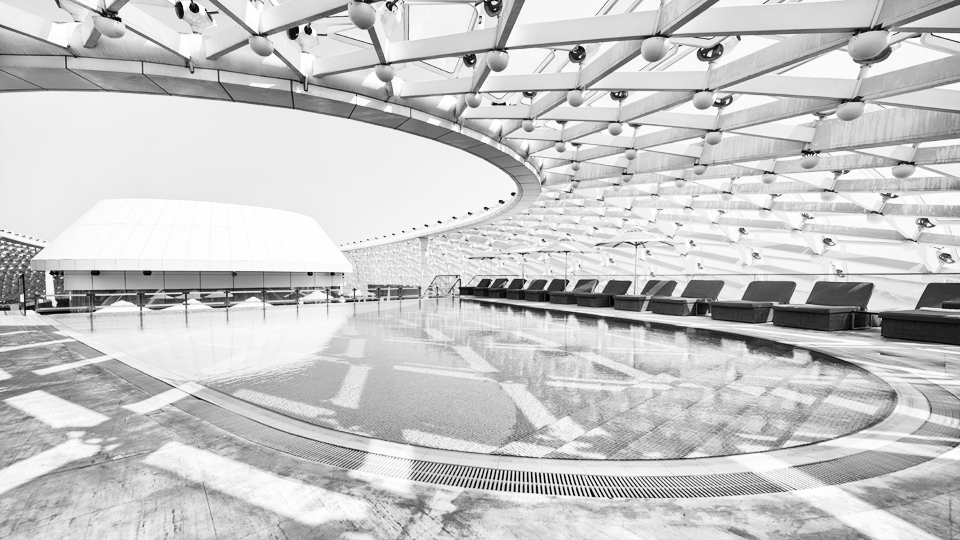 As you might have seen from my Instagram feed, I spent a couple of days at the Yas Viceroy Hotel (formerly known as the Yas Marina Hotel). The hotel is most famous for being the only hotel that straddles a Formula 1 track and the architecture reflects the racing environment in every detail.

There is a swimming pool on each of its two buildings and the superstructure of the building creates really interesting effects above the water making the whole thing look very futuristic. Unfortunately, when the hotel was designed, I don’t think enough thought was given to how all these areas will be kept clean as some of the places would be very difficult to get to. As you can probably see by rolling over the image to see the original, a lot of the beams are very dusty. That’s also the reason why I decided the process the image in black and white as I felt the dirt was just too distracting in the colour image.

On another note, the blue hour photography workshop I’m running for GulfPhotoPlus on Friday is now sold-out, but if you’re still interested, you can sign up for the waiting list as we will hopefully run another one soon.